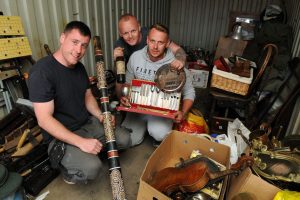 What are the chances of stumbling across thousands of £s worth of antique loot stuck in an old container?

You’de have to ask Michael Gouder, Danny Owens and Anthony Frankish as they were lucky enough to strike gold recently in an auction based at Haverton Hill.

In these “storage wars” style auctions bidders aren’t allowed to view the contents of the abandoned units, essentially leaving it as a potential lottery for the daring bidder.

This could easily lead to unlucky punters spending way too much on a container they have “a good feeling about” as there is very little you can determine whilst looking at a box filled to the brim with bin bags.

Luckily for the lads, this wasn’t the case when they found that their modest investment quickly turned into thousands upon opening the container. They initially went to the event hoping to bid individually but later thought it was better to combine their cash to beat the bidders and give themselves a competitive advantage.

Among the items are desirable pieces from known makers Royal Doulton and Wedgwood as well as historically significant curios such as a bottle of wine from Nazi-occupied France and a court log that dates from 18th century Suffolk.

Does this story make you more likely to risk bidding blind at lapsed storage hire auctions? – join the conversation on Twitter.

Whilst our containers doesn’t come loaded with precious treasure they are still very useful for your storage and site accommodation needs.

Contact one of our friendly team today to get a quote on our wide range of container units.

Call Us or Complete Our Form